So Minecraft 1.5 finally made it so that snow can stack up …… but the guys at Mojang seem to have missed something. The snow doesn’t pile up on it’s own! Well, this mod fixes that.

How? When it’s snowing, any snow blocks that have a view of the sky will randomly grow one layer higher every once in a while. Also, when snow blocks melt, they don’t melt all at once, but instead one layer at a time. Snow will never pile up more than one block.

Why? Because it’s more realistic, and it looks pretty too.

Snow shovels are special tools that only work on snow. When used on layered snow, they drop the layers rather than snow balls, and when used on block snow they drop the block and not snow balls. Because snow is such a soft material, snow shovels will last five times longer than regular shovels.

There are several different varieties of snow shovel, wood, stone, iron, gold, diamond, bronze and steel if you have mods that add those metals.

All recipes are as follows, just substitute whatever materials for the iron in this pic. 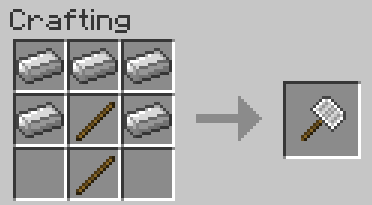 There is also an alternative recipe for Show shovels if this one is causing compatibility issues. This recipe is the same but replace the stick in the middle with a wooden shovel. This alternative recipe can be enabled from the config.

I also added a crafting recipe for snow golems, but only if you have NEI installed. (The egg would be useless without it.) 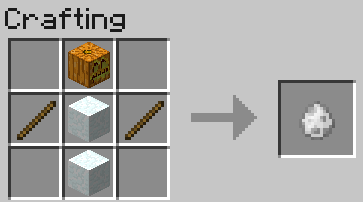 There is also a recipe to turn four snow layers into one snow block. Just put them in a square like you would with snow balls.

These can all be disabled in the config file, and the snow shovel id’s can be changed too.

Snow is now allowed to land on any block with a solid top surface, including Glass and Ice. Watch your frozen lakes get covered in snow.