Health no longer regenerates from having an almost full hunger bar, health can only be regained with golden apples and health potions.
Does not use the gamerule for stopping regeneration to allow for permission based regeneration 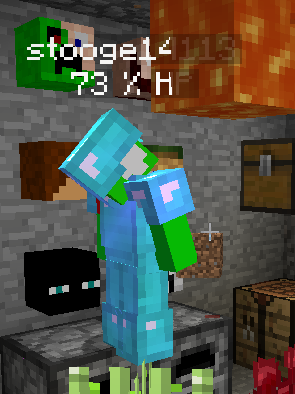 Golden apple recipe is now the default recipe in Minecraft!

Brewing of splash potions and tier 2 potions disabled by default

Can craft a golden head that heals for 4 hearts instead of the usual 2 hearts for a golden apple, amount regen configurable

Players drop their head on death, PvP only flag available. Tries to place the head in the world on a fence but will drop as an item if it can’t

Starting a message with ‘P ‘ will make your chat anonymous to everyone on the server that doesn’t have permission to see names (default op)
e.g. Saying ‘P This message is anonymous!’ will show up like this:

Allows the world to generate with a bedrock wall to contain players within a certain distance
(Use of WorldBorder still recommended in conjunction with the borders if necessary), different shapes available 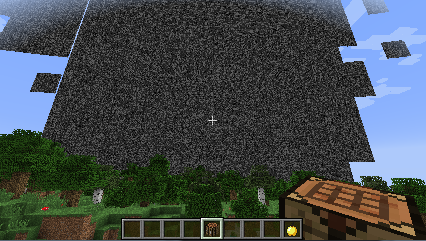 Can scatter a player/players with set parameters (radius, centre coords, world and scatter type) with configurable delay between sequential teleports. Can teleport people as a team (for more info check the commands page)

Command /freeze that will give all players without a specific permission specified
potion effects from the config file making it very difficult for them to move/do anything.

Add a prefix/suffix with formatting to death messages, defaults to making the message red with coordinates.
Can remove death messages altogether, uses permissions

Add any items to a player’s drops when they die. Configurable with ranged amount and % chance to drop

Players leave ‘footprints’ behind them as they travel, disabled if ProtocolLib is not found

Hardcore hearts are shown instead of normal hearts for players, disabled if ProtocolLib is not installed