First, you want to craft an Energy Bridge:

This will be the center of your conversion system. Put it somewhere. Next, pick one or more of the various mod systems below. You’ll need at least one ‘consumer’ and one ‘producer’. Put them adjacent to the bridge. You’ll get a GUI like this: 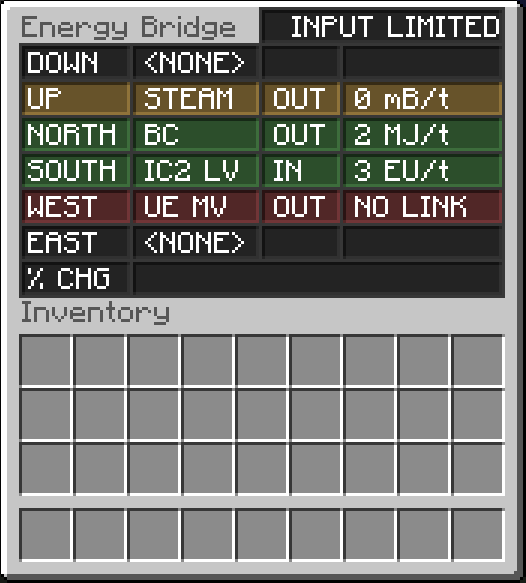 At the top, “INPUT LIMITED” or “OUTPUT LIMITED” will tell you if you’re drawing more than you’re inputting, or vice-versa, respectively. Each row describes one face of the bridge, and lists the following data:

In addition, the background of each row will be black if nothing is there, red if a block is present but has no connections, yellow if connected and 0 throughput, or green if it’s doing something.

Note that producer/consumer blocks’ faces will change when a connection is detected.

There is also a universal charger as of 2.1:

This links to chests (anything with an inventory, really) and can charge items inside of those chests. It understands both IC2 and UE items. It can also charge items in the player’s inventory if the player stands on it.

All recipes shown are for consumers; to get a producer, just put the consumer in a crafting grid (the reverse also works to get consumers back).

BC consumer/producers are available if either BC or TE are installed.

IC2 EV consumers have no upper limit on input pulse size, so they’ll accept nonstandard wiring like GregTech superconductors just fine (though finding a way to output all that power might be difficult). EV producers output 2048EU. All IC2 producers will output a single pulse per tick of their specified voltage, but this can be increased in the config.

Steam consumers/producers can be throttled in the config file if desired. Remember, ThermalExpansion Liquiducts are by far the most effiicent system for liquid transport.

Note that UE’s own “Watt” is power/second, and the bridge displays power/tick. There is a factor of 20 difference between them. This is not a bug.

PowerConverters 2.x exchange rate is based on the cost to smelt a single item in a furnace. This cost is 70KW (or KJ depending on how you look at it) for UE, 390 EU for IC2, and 160MJ for ThermalExpansion (which I’m counting for BC because BC has no furnace, and ignoring TE’s special furnace recipes that are cheaper than normal). There’s no such thing as a steam furnace, but the Railcraft wiki says it’s 5 steam per 1 MJ, so we’ll assume a theoretical steam furnace would consume 800mB.So, inverting those (and adding a x10 to get rid of most of the decimals), we get the ratios as follows:

Note that Factorization was assigned based on its steam being equivalent with Railcraft’s.

Now, it’s entirely possible to find another mod with different ratios that when combined with PowerConverters will cause a positive feedback loop (i.e. infinite energy). UE in particular has some rather weird default ratios that basically guarantee this can happen. I will not treat this as a bug – if you don’t want it to happen, change the numbers (see below). If you manage to cause an infinite energy scenario using just my stuff though that’s definitely a bug, tell me.

If you think they’re too good, or you think one of the power systems is too weak compared to the others, or you want to add a deliberate loss during conversion, just go to the config. You can change the input and output multipliers for all four power systems individually.