A HUD mod that focuses on giving a relatively large amount of useful information, whilst attempting to utilize at little screen estate as possible, by dynamically changing the coordinates of items on-screen, depending on certain events. It also has a bunch of other helpful tools, including a text editor to take notes, jump calculations, and more!

Potion effects will also be displayed, but without taking up like half the screen on account of their massive textures.
Screenshots:

Note that you can change the color of the Menu, via the menu :3 I’ll get onto that down below:

Note that things may be in a different order for you – i’ll get to that in a sec.
From top to bottom (in this image’s example):

Holding down the modifier key: 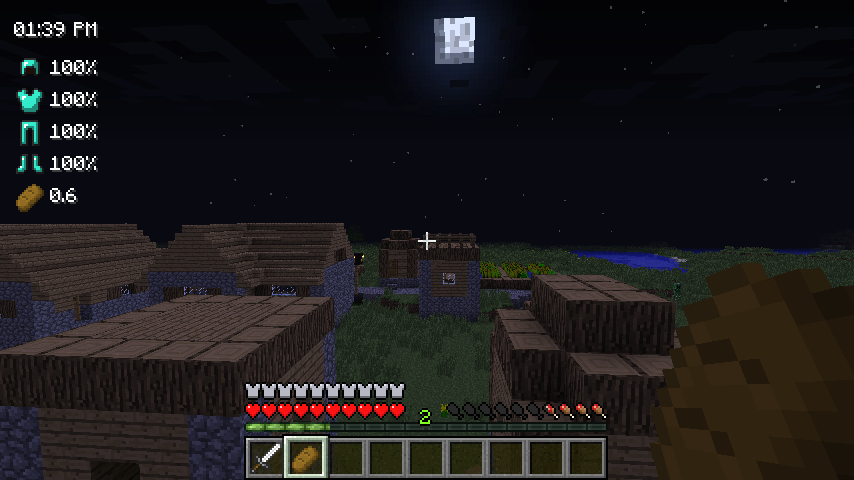 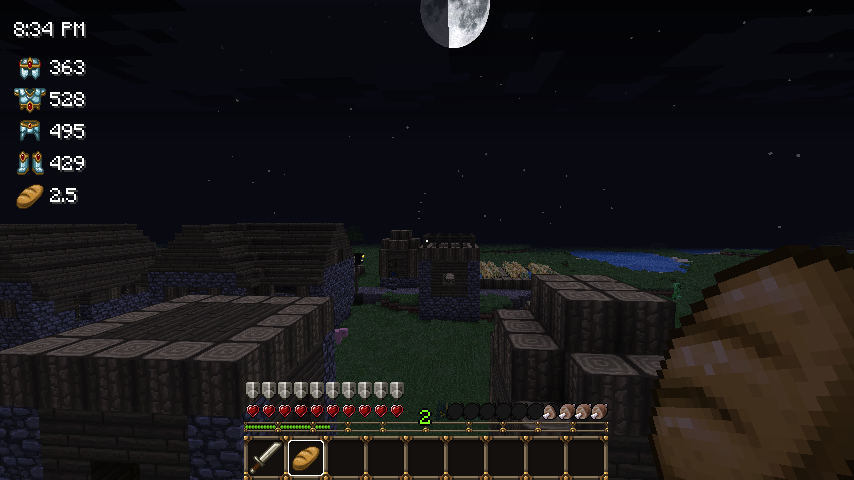 If the recipe found gives more than 1 item as a result, HUDini will tell you how many it makes in the top label: 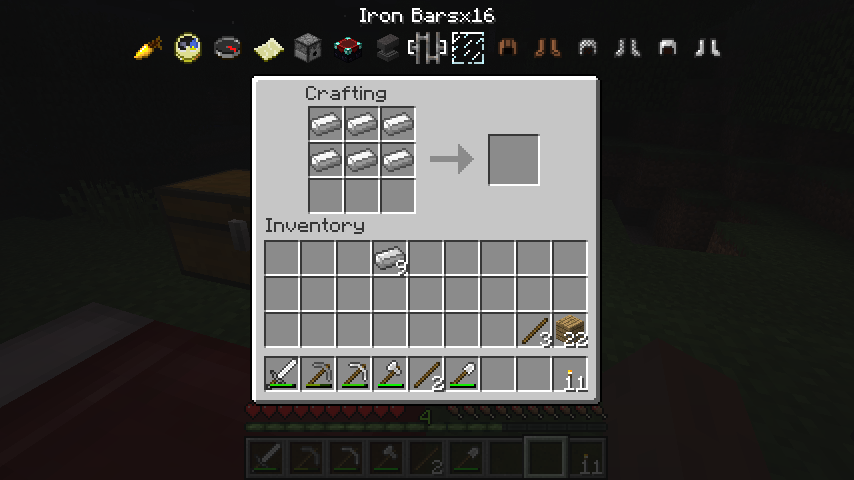 Selecting a file to edit from inside Minecraft: 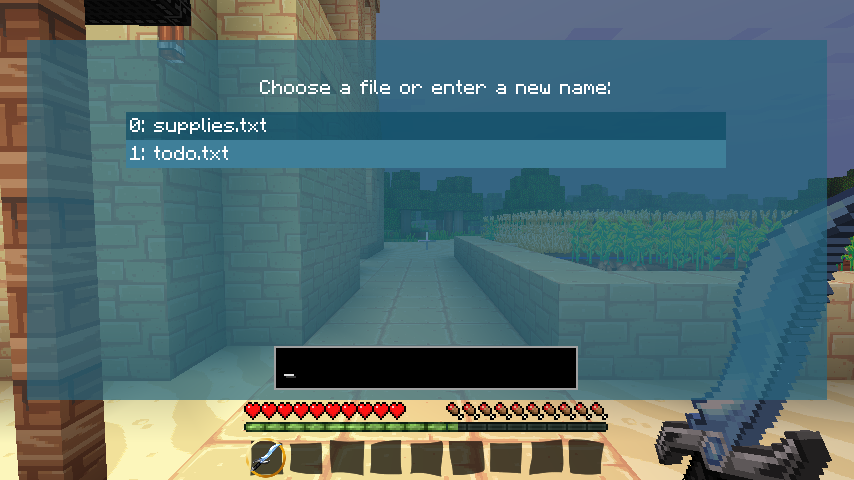 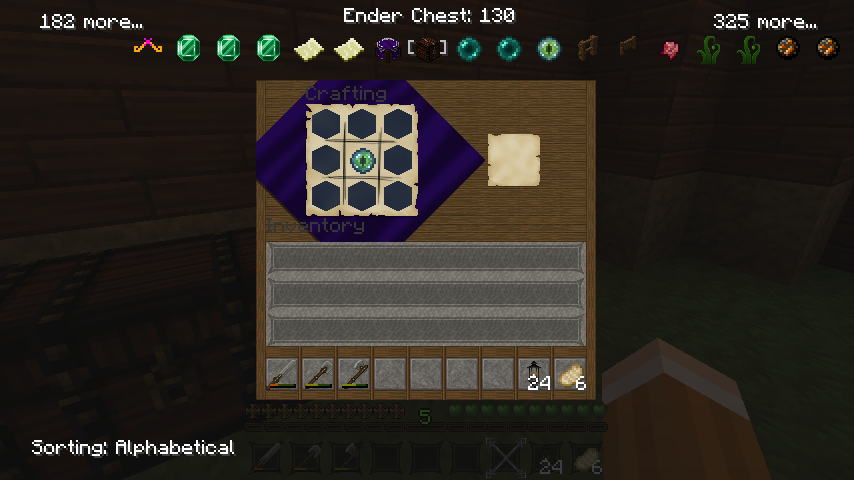 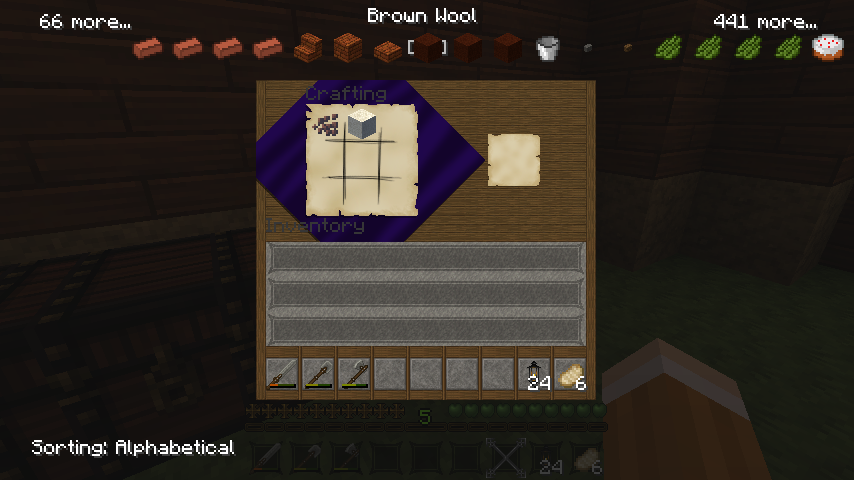 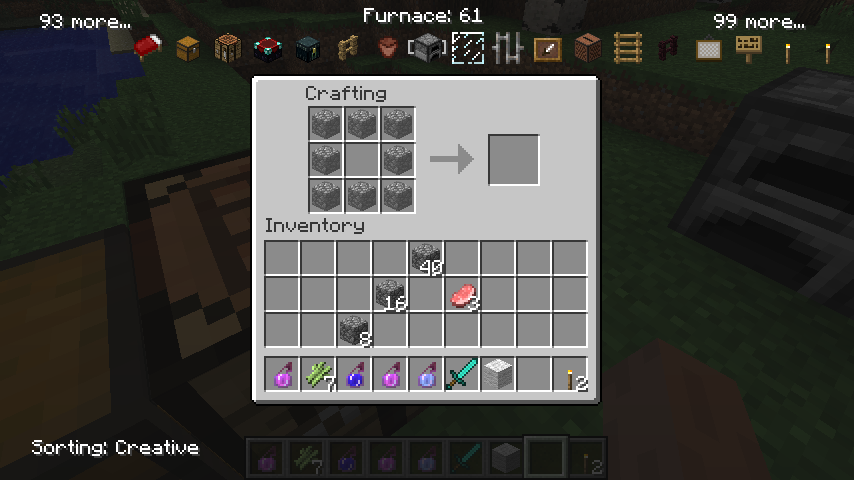 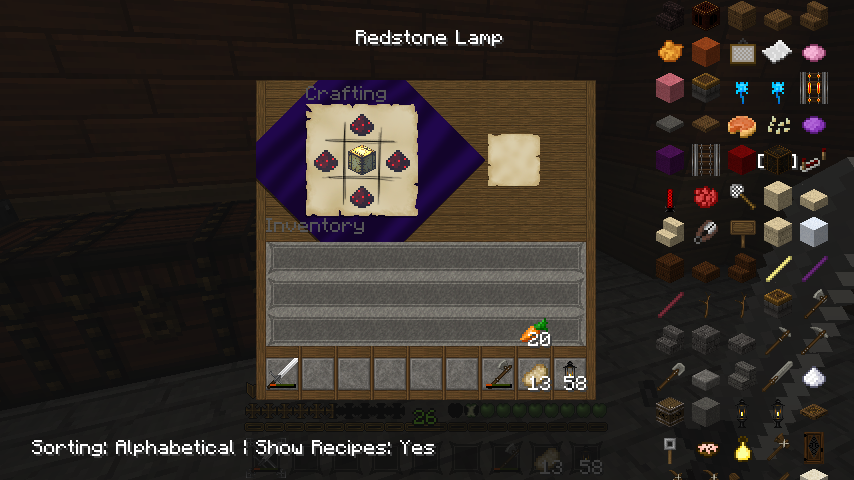 And a little notification (shown bottom right here) to say if you can or can’t make the recipe with items in your inventory. It moves itself to the top left if you are in column mode. 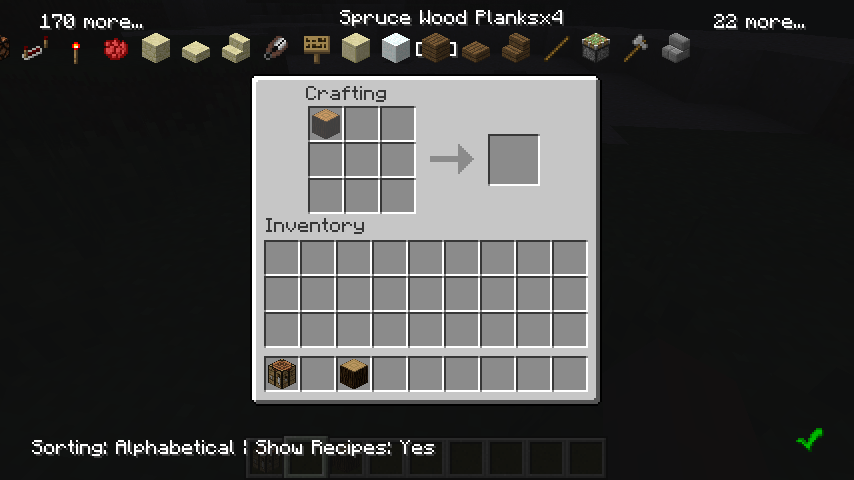 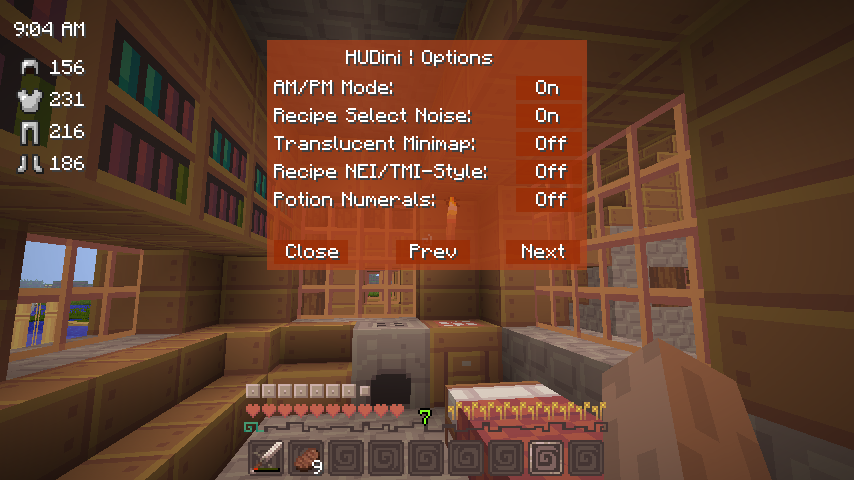 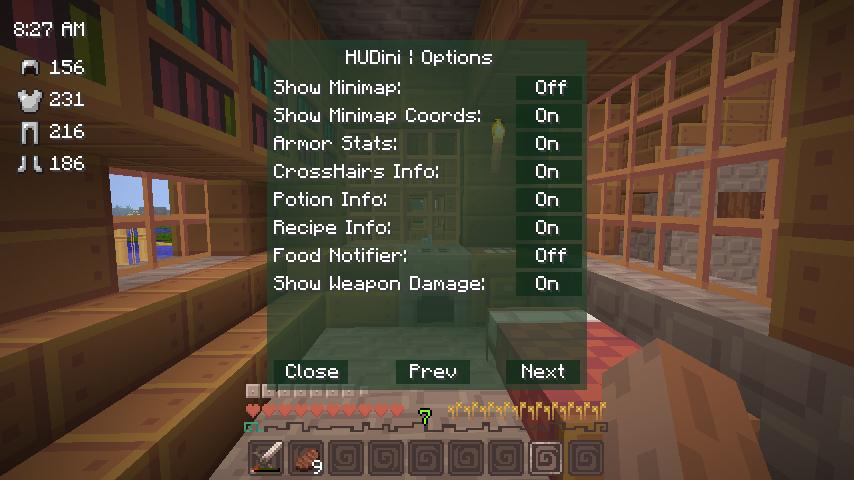 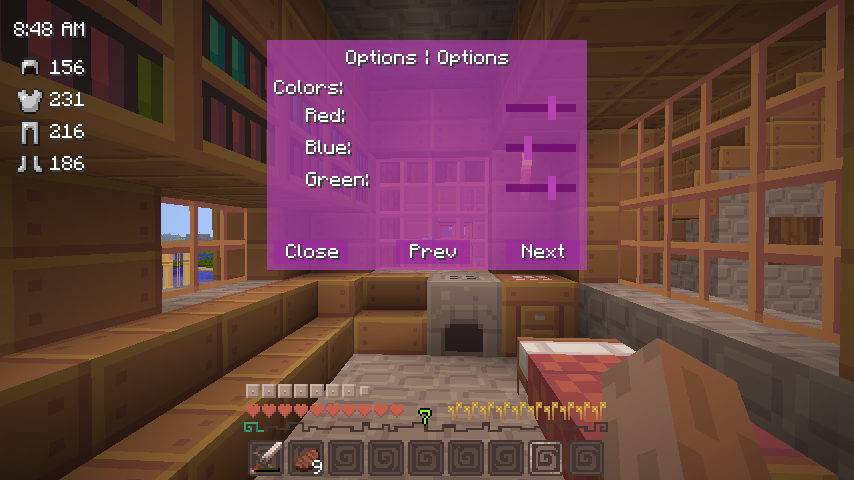 Ingame Text Editor:
Allows you to edit text ingame. All text files are put in a folder called HUDini inside .minecraft – you don’t need to create the folder or any files yourself, hudini will do it for you. When you press the key to open the text editor (apostrophe [ ‘ ] by default), you’ll be greeted with a screen that shows a list of all the text files it can open. There’s also a text field that you can type in if you wanna create a new file. Simply click on the filename you want, and HUDini will display it on screen.

Editing text:
Editing text is fairly simple: To move around, use the arrow keys. To move the page up and down (e.g. to see lines later or earlier in the document), its pgup and pgdown. To save press ctrl s. To exit, press escape – but note that your text won’t be saved automatically! You’ll need to press ctrl s before you exit if you wanna keep your text.

The interface is fairly minimalist: you have the line numbers on the left hand side, slightly darker then the editable text. The line numbers are not added to the document, they’re just there to help you navigate. On the bottom left, where it says “Ready…”, is the current status. It will say what its last action was, for example saving, and moving a lot of lines. On the bottom right corner, we have the cursor’s x and y coordinates, respectively.

And of course, at the top left is the file we’re editing. 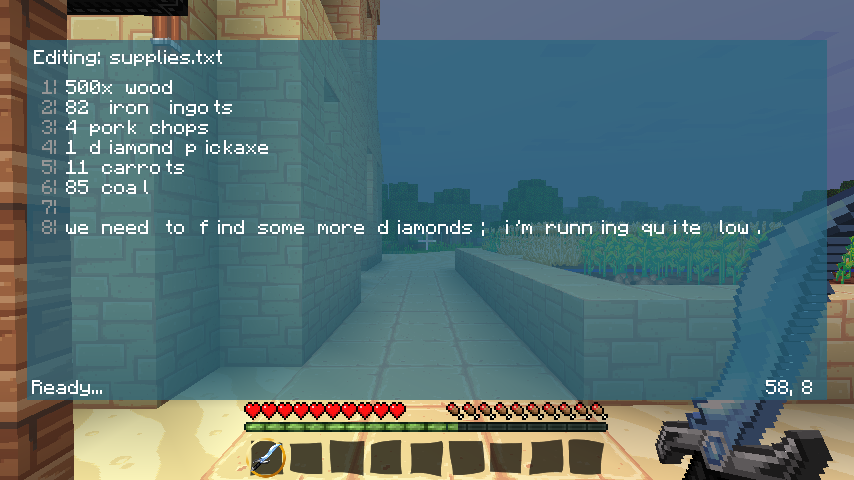 Text files edited by HUDini are placed in a folder called HUDini in .minecraft – you can change the directory name via the config file that lives in the folder called config, in your .minecraft folder. HUDini will not look for text files in any other place.

Let’s say you want to multiply 5 by 5. Type into a text file:

And HUDini will write the answer in its place – 25. Press tab after you’ve closed the parentheses (written the last “)” for it) for this to be fired. 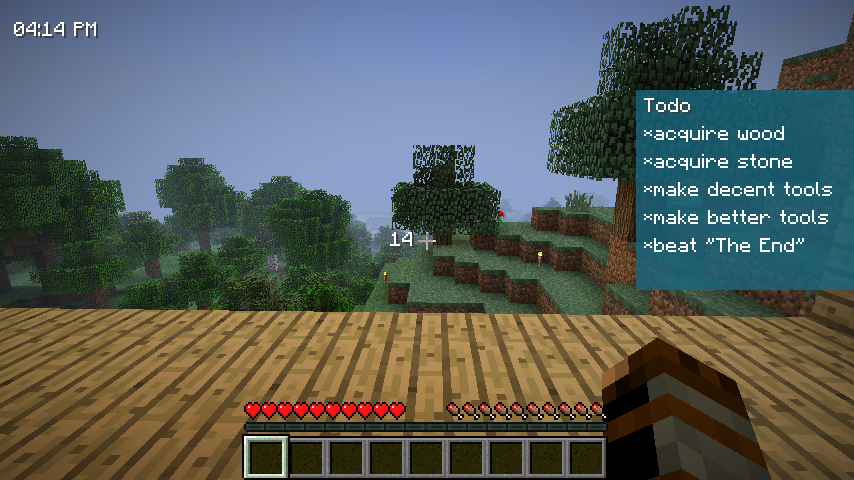 If you have a file named todo.txt, HUDini will render its contents onto the screen when you press modifier+X. It slides out. Snazzy. If you have a word/line surrounded in square braces, it will render them  as a title. You can change what character denotes a title via the config file, as can you change what the keybinding is.

Pressing “c” in-game will open the commands window. From here you can assign text (and therefore commands) to keys on your keyboard. 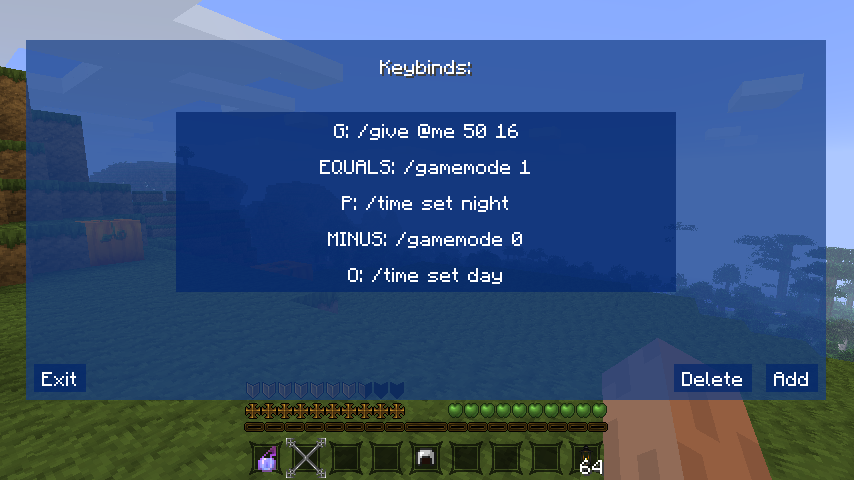 Note that as with all graphical elements of HUDini, the colours are taken from the options you set in the menu.

Press the add button in the bottom right corner to open up the add command window: 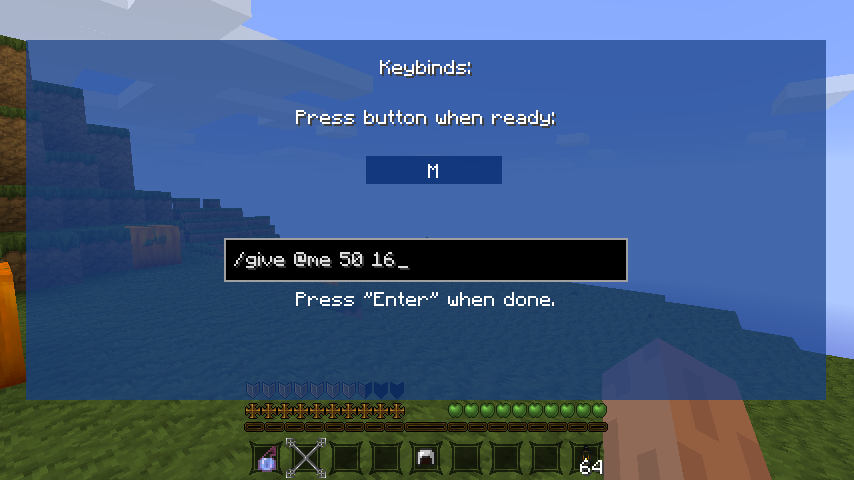 To save the keybind, press enter while the text box is focused. If the keybind is conflicting, or something has gone horribly wrong, it will flash a message.