Information :
The Female Creeper is a Passive mob, the idea behind this is that she might still be a creeper, but this one can hug you without blowing up in your face. When the Female Creeper was first discovered, everyone was afraid they thought it was the same as their male counter-parts, but they were wrong. Although if you go as far as to abuse these helpless creatures they will not fight back, because they do not possess the ability to explode that their male-counterparts do, some believe the part it is missing is the ‘Gun Powder Gland’ although this is not the technical term for it. When these Creepers are killed mercilessly by you they will drop ‘Female Creeper Skin’.
The Creeper Egg & Empty Creeper Egg 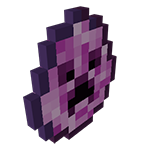 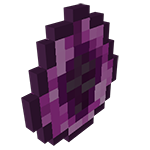 The ‘Female Creepers’ will sometime lay ‘Creeper Eggs’ while they are out and about, these eggs can be used to hatch little baby female creepers. Sadly do to the some unforeseen reasons the eggs will be empty, these empty creeper eggs don’t appear to have any use from what I’ve seen. Albeit just because I haven’t found a use for them doesn’t mean you won’t be able to.

This egg is a very curious specimen, you create it by combining gun powder and a creeper egg shell. The creeper egg shells are dropped when a creeper egg is thrown and successfully spawns a baby female creeper. That being said this ‘Mysterious Creeper Egg’ could do anything for all I know, I’ve not tested this specimen…no I’m not scared I just don’t wanna die!

The ‘Boiled Creeper Egg’ restores 2 hunger, and can be obtained by cooking a ‘Creeper Egg’. If you start to feel guilty that you are basically eating an unborn baby creeper don’t be, it’s the circle of life and YOU need to LIVE!

If you feel like cooking an egg you just stuck a bit of gun powder in more power to ya. Albeit this egg will not taste as good do to the gun powder in it combined with the fact that there is no baby creeper in it either so this only restores 1.5 hunger. This means that if you don’t want to eat unborn baby creepers this is a “great” alternative. 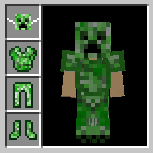 So you wanna be a creeper? Well you can get pretty close with this fabulous new armor!
While wearing this armor normal creepers will show no interest toward you unless you smack them in the face or put the armor on in front of them, because we all know creepers aren’t stupid. Also while wearing this armor ‘Female Creepers’ will follow you around because you look so sexy…so enjoy that. 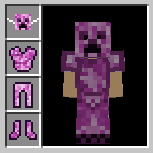 Okay you may not want to be a creeper so how about a ‘Female Creeper’? Well suck it up because this is what your getting!
After you put on the wonder outfit that is the ‘Female Creeper’s’ very own skin…I know sounds a bit morbid, but just listen to all the benefits. You appear so sexy in your clothing that creepers will follow you around anywhere you go…I’m not really sure what they want, but hey it can’t hurt right? Okay maybe a little because you have to get rid of the creeper following you before you take off the outfit otherwise you will have a/some/many exploding creeper(s) in your face. So maybe these aren’t the best benefits ever, but hey it’s better than nothing.