This is a new mod will add fake ores in your Minecraft world. When you break a fake ore, an entity will spawn and attack you. All fake ores will drop item with chance to allow you to craft the Ore Boss spawner. When you beat this boss, you loot an Ore Boss Star allowing you to go to the Fake Ores Dimension.

800 HP, normal speed.The boss will attack you in 3 phases and will teleport randomly.PHASE 1 : He will attack you attack in melee and will launch big fireball, So avoid being near him in this phase !YOU CAN RETURN HIS ATTACKS (fireballs only) !PHASE 2 : In this phase, he will start teleportation cycle in rare and randomly time and will launch few projectiles (arrow and snowball)PHASE 3 : In this final phase, he will teleport a little more often, in a random distance, this is the time to spam your left click with your diamond sword ! \o/. For his attacks, in this phase, will launch within a certain period, lightning and launch snowballs and arrows.At his death, he drop an Ore Boss Star used to activate the Fake Ores Dimension portal..

20 HP, fast, medium damages. He can protect with a shield that can launch in a irregular delay. Can create a path of ice upon contact with water and an obsidian path upon contact with the lava.Mob Screenshot : 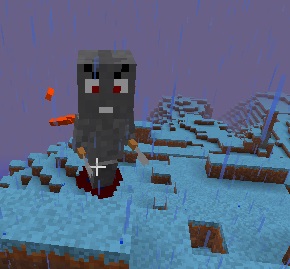 30 HP, fast, small dmaages. He have the ability to climb the blocks.You can ride this mob ! (to do that, you need a Pass Card).He can spawn smoke particle and fly in a large speed in random time (except if mounted).Mob Screenshot : 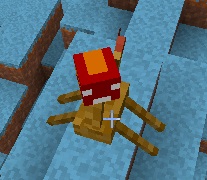 This weapon allow you to one shot alive ores (fake ores).WARNING : IT DOES NOT WORK FOR ANOTHER MOBS !The AntiOre stone is rare, when you find it, DON’T COLLIDE ! IT WILL INFLICT YOU SEVERE DAMAGE AND YOU WILL (MAYBE) DIE !

The cooked obsidian (or call it “Red Obsidian”) will allow you to build the portal to go to the Fake Ores Dimension.

When you collect 4 fragments (shown in the picture) loot from mobs and 4 golden ingot and 1 iron block, You will craft an item allow you to spawn the Ore boss. 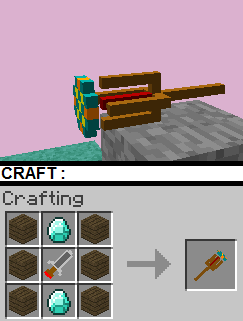 This item allow you to find fake ores which are near the player.

This item allow you to ride the mob Schaza.This item don’t have any restrictions for the time.

ORES OF THE DIMENSION :

The Blurk / Daren / Purlight / Rainbow are very rare materials from the FakeOres Dimension, the rarest of them is the Rainbow.These 4 materials will (in a future version) allow you to make new objects, but for now; you can only make decorative blocks: